News From Your President

Happy Holidays to all!

This is my final message as President of the Upstate SC Chapter of ASG.

First, I would like to thank all those members who have gone above and beyond to make my year wonderful.

Second, I thank all those members who have contributed to our community service ventures. I am so proud of our guild’s accomplishments this year in the community service area and feel this year was the best in donations. We really turned that trash into treasures for others.

Third, it’s not good bye as our move to Ocala, Florida will probably not occur until Fall of 2023. I look forward to the next 10 months or so helping in any way I can and enjoying our great group.

The guild is being left in the great hands of Phyllis Costa as President, Marcia Baker as Treasurer, and Sue Dolinar as Secretary.


News From Your 2023 President

I'd like to extend to you my wishes for happy holidays. It's hard to believe that another year is coming to an end.

As I look forward to serving as guild president, I thank you in advance for your support in the coming year. Let's appreciate the journey together and recognize our strengths.

Thank you for renewing your membership

Phyllis Costa - President
I am Phyllis Costa, originally from New York City. I raised my family in Pearl River, New York, and arrived in Greenville via Florida.
I come from a family of tailors, drapers and seamstresses, my mother having been a sample maker for Jones of New York. Being exposed to the din of sewing machines and to the pressers' blasts of steam eased me into a love of sewing. I've had formal instruction in garment sewing and tailoring.
I was introduced to the American Sewing Guild in Florida where I served as neighborhood group leader for four years.  I also worked in that guild's couture group.
In 2014 I moved to Greenville.  I joined the Upstate ASG where, for two years, I worked as neighborhood group leader. I have worked on numerous committees and for four years I served as neighborhood group liaison.
My sewing has brought me the wonderful experiences of meeting new friends, learning through classes, attending annual ASG sewing conferences and even quilting.
I look forward to serving as your president.

I have been a sewer since I was 10 years old, I started off sewing to have more clothes and still do a lot of garment sewing.  I have expanded into quilting, machine embroidery, purse making, and any new sewing experience.  I have just retired from teaching nursing and I am looking forward to spending all the extra time sewing.

I came to Greenville seven years ago from Connecticut where I taught mostly first grade for twenty-nine years. The last six years before I retired, I was the treasurer for our Connecticut Education Association group, so I do have treasurer experience. I am also the Greer neighborhood group leader, since, I think about six years. I have recently retired again from long -term substituting here in SC. While I have started sewing again, I also pin loom, crochet, knit, and a form of crochet called amigurumi, which is making stuffed animals and dolls. I live with my husband, Michael; my dog, Brady; and my cat, Arlo. I am looking forward to a great year and will be seeing you at the neighborhood meetings.

Anne Winans passed away yesterday in her sleep at St. Francis Hospital. A celebration of her life will be held sometime after the first of the year.
Anne was an active member of ASG for many years,  when cancer took over her body she could not attend meetings but continued to sew bags full of surgical caps,
Christmas stockings, tote bags and quilts of Valor quilts. Please keep Dave, her son and daughter and grandchildren in your prayers.

Everyone who attended the Staycation made a stocking for the foster children.

Many of our generous sewists have been busy with community service items which have all been delivered now. We surpassed our goal of 100 Christmas stockings along with pillow cases, totes, quilts, surgery caps, cancer caps and anti-ouch pouches.  hank you to all who helped on these much needed projects.

Our totals for the year are:

25 anti-ouch pouches to the cancer center

6 quilts to the Children’s Home

30 pet beds to the Humane Society in Asheville


Children’s hospital has a good supply of surgery caps so won’t need any more for a while. We have been a little short on tote bags for Safe Harbor, so maybe in January we can concentrate on bags and the cancer caps and anti-ouch pouches for a while.

One of our biggest supporters was Anne Winans who made so many surgery caps. She also made quilts, quilts of valor, pillowcases and Christmas stockings. This past year Anne was too ill to attend meetings, but she continued to sew until her death on December 11. We appreciate all she has done for us and will miss her and her kindness and generosity.

When I deliver these items and talk to the people in charge, I realize how much need there is in our community and how much our efforts are appreciated. So I thank all who donate time, material and effort in providing these items. May you all have a merry Christmas and a happy Hanukkah.

Our ASG Chapter has received a donation of flag fabric from a former member so we have decided to have some fun with the fabric. There will be a presentation at an upcoming meeting about making garden flags. During the meeting you will receive a kit to make a flag (there will be several to choose from in addition to the two shown below). The completed flags will to be brought back to a meeting two months later. There will be a drawing at each neighborhood group meeting for a gift certificate to the local quilt shop. You can only enter once, and you will need to be present to win. More information will be given at the neighborhood meetings. 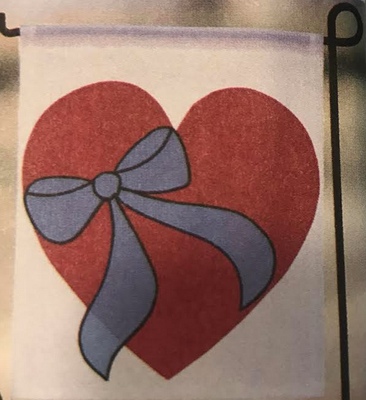 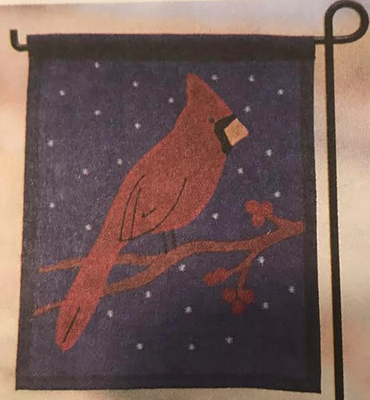 We had our second 4 H workshops in November. The Greenville event was an after school activity that also had a cooking activity. We made table runners and star ornaments. I think the good smell of baking cookies distracted some of our sewers. The Cherokee workshop was held on a Saturday and most of the girls who attended our first workshop easily finished both projects and then had fun just playing with scraps and different stitches making up their own designs The good news for us is Laura Hadden the Cherokee extension person is moving to Fountain Inn and taking over Spartanburg extension office. This will be much closer for us. She has asked if we can do a workshop in February. I think our first year has been successful and hope our guild continues to support this event.

What's going on in the neighborhood?

Hope everyone had a great holiday and is ready to meet again at the United Faith Methodist Church. We have a new day! We will now be meeting on the third Wednesday of the month from 2 – 4 pm. Our first meeting will be January 18th. This meeting will be a planning meeting for the first few months, so bring your ideas and your sew and shares. Hope to see you there!

The Feisty Stitchers’ last meeting for 2022 was held on December 15th at Tupelo Honey in South Asheville. It was a wonderful celebration of sharing time together with many sewing friends.

During 2022 the Feisties became much more than a sewing group recovering from a post traumatic pandemic situation. We became a group, open to opportunities for expanding and creating our own story by developing new projects and new ideas along the way. During 2022, our group grew by an additional 30%.  And now more than ever, we are an established, diverse group of incredible sewists!  2023 should (and will) be a very exciting year!

Make your own spray starch

Use cheap potato vodka to make the  fabric crisp

Got to this link and sign up.
http://smile.amazon.com/ch/80-0535262
Once you sign up, every tine you shop AmazonSmile, a donation will be made to our ASG Chapter.

Please send your Sew and Shares to Cindy by clicking here.